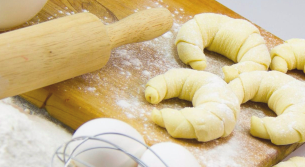 The dough A classic croissant dough requires six basic ingredients: milk, yeast, flour, sugar, salt and butter. It is folded four times and can be used to make almond croissants, pains au chocolat or pain aux raisins.   1)  Dissolve 15g yeast into 275ml of milk. 2)  Put 500g bread flour, 7.5g salt and 75g caster sugar into the mixing bowl. 3)  Turn the mixer on at slow speed, then slowly pour in the milk mixture. Mix for 5 minutes until the dough starts to come unstuck from the bowl. 4)  Remove the dough from the mixing bowl and place it in a lightly oiled bowl. Cover with cling film and leave to rest overnight in the fridge. 5)  Lay out two pieces of cling film on top of each other and put 250g butter in the middle 6)  Fold over the cling film, leaving a gap between the butter and the edge of the cling film to allow the butter to spread. Use a rolling pin to make a square 1cm thick. 7)  Store flat in the fridge for 30 minutes. 8)  The following day, remove the butter from the fridge and leave it to warm up for 15 minutes. 9)  Turn over the dough on a lightly floured work surface, pressing on the dough with the palms of your hands without kneading. 10)  Shape the dough into a square and roll out the 4 corners, leaving the middle untouched. 11)  Flatten the middle of the dough with your hands or using the rolling pin and place the butter in the centre. 12)  Wrap the butter up by covering it with the 4 sides of the dough. 13)  On a floured work surface, roll out the dough into a long rectangle. Remove the excess flour with a brush or the palm of your hand. 14)  Fold the bottom section of the dough onto the middle section. 15)  Then fold the top third over the top and press down the edges. 16)  Make a 90 degree counter-clockwise rotation of the dough. You’ve just made the first fold. 17)  Repeat steps 13 to 16 to make the second fold. 18)  Mark the top right corner with two fingerprints. It will help you remember how many folds you have made. Wrap the dough in cling film to prevent it drying out and put it in the fridge for 30 minutes. 19)  Remove the pastry from the fridge and place it on a floured work surface with the opening on your right hand-side. This will ensure that you do not undo the fold you made earlier. Repeat steps 13 to 17 to make 2 more folds. 20)  Mark the top right corner with 4 fingerprints and wrap the dough in cling film. Put it in the fridge 30 minutes before use.