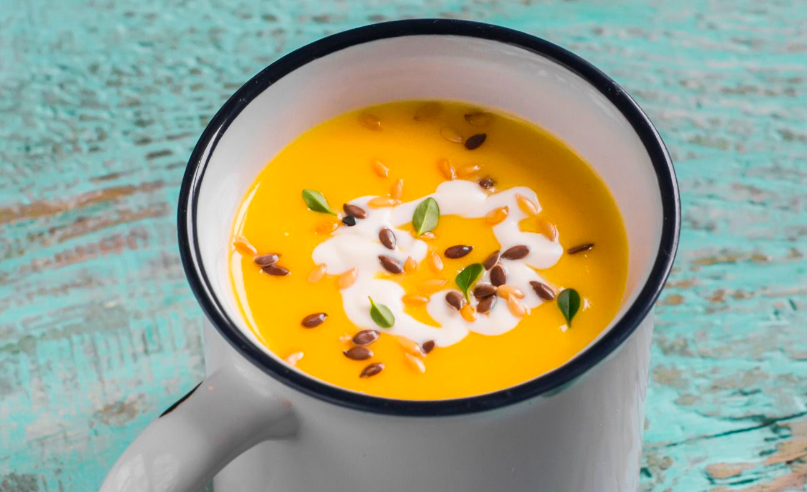 Had a long day, but can’t be bothered to cook? Ever thought of trying your hand at some mug meals? Nope, we’re not talking about those infamous cakes in a cup (although these are one of the many tasty treats you can rustle up), instead we’re talking about quick and easy, healthy recipes that you can follow to get some amazing dinner ideas when you’re cooking for one. It’s as easy as make, mug, microwave!

Method:
–  Roll out the pastry on a lightly floured surface into a rectangle
–  Cut into thin triangles, re-rolling the trimmings to use all the pastry
–  Spread the pastry with the butter, rolling up each one. Start with the longest side and twist into a crescent shape
–  Put the apricot jam into a mug and warm through for 20 seconds
–  One at a time, put the croissants into a large mug and microwave for one minute until puffed up
–  Remove from microwave and brush with the warm jam to glaze
–  To make the marmalade sauce, put the orange juice, sugar and cloves into a separate large mug and microwave for 1 ½ minutes, stirring until the sugar has dissolved
–  Stir well and microwave for another minute, watching carefully and pausing if the sauce looks like it is bubbling over –  Blend the cornflour to a paste with the butter
–  Stir the mixture into the sauce and microwave for a further 30 seconds (the sauce is much runnier than marmalade). Serve with the croissants.

Method:
–  Put the oil, chicken, onions and garlic into a large mug and toss to coat all the ingredients with oil
–  Microwave for 1 ½ minutes until cooked through
–  Add sweetcorn, stock and five-spice powder, mixing well
–  Microwave for 2 minutes, being careful not to let the soup boil over
–  Blend the cornflour to a paste with a little cold water and stir into the soup
–  Microwave for 30 seconds
–  Stir the soup briskly with a fork as your pour in the lightly beaten egg white, so it cooks into ribbons that run through the soup

Method:
–  Put the butter in a large, wide mug and microwave for 20 seconds until melted
–  Lay the pastry on the work surface and brush with the butter
–  Use the pastry to line the mug, feeding each strip down one side, then up the other side, overlapping them slightly
–  Leave the ends overhanging and microwave for 30 seconds
–  Put the bacon on a double sheet of kitchen paper and microwave for 2 minutes until just cooked
–  Whisk together the eggs and milk, and season with salt and pepper
–  Stir in the bacon and cheese, then pour into the mug
–  Microwave for 5 minutes until just set. Leave to stand for 2 minutes, then serve hot or leave to cool and chill in the fridge

Method:
–  Put the butter in a mug and microwave for 20 seconds until it is melted
–  Stir in the breadcrumbs
–  Place the banana slices on top and pour over the condensed milk
–  Microwave for 1 minute
–  Microwave for 15 second bursts for a further 2 -3 minutes, watching to make sure the milk does not boil over
–  Leave to cool for at least 10 minutes
–  Sprinkle with sugar and serve warm, or leave to cool and chill before serving

Method:
–  Put all the cake ingredients except the icing sugar into a large mug and mix well
–  Microwave for 3 minutes until risen and springy to touch
–  Leave to cool